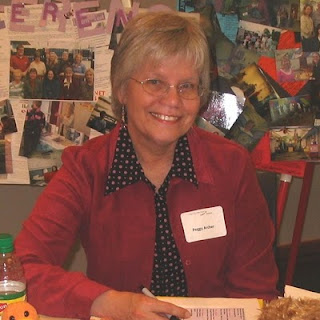 Something a bit different today - I'm pleased to be able to host picture book author Peggy Archer. Here's what she has to say about how she crafts her books...
Congratulations on the publication of your newest picture book, NAME THAT DOG! Can you tell us a bit about the book?
Thank you, Janet!
NAME THAT DOG! is an alphabet book, and a book of poems about dogs and their names. It all started when we got a puppy and named her Snickers. After we named her, I started thinking of how she actually reminded me of a snickers bar. She was a caramel color. Her ears looked kind of like milk chocolate. And she was definitely nutty! So I wrote a poem about her and her name. I had no idea at that time that this would be the start of a picture book. 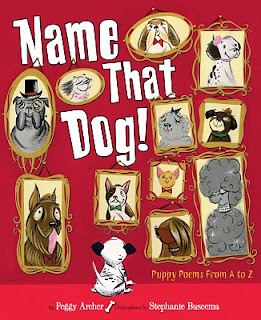 I wrote more poems about Snickers, and eventually about other dogs, too, including poems about dogs’ names. It grew into the idea of writing a book about dogs and their names.
I chose the alphabet as a framework, and selected names that fit the dog’s looks or personality rather than using people’s names, although there were a few exceptions. Elvis was named for a famous person. Frank was a nickname for frankfurter. Rex was also a nickname, for T-Rex, and Oscar was named for the Oscar awards. I wanted the poems to be fun, and make the reader smile. I used a marching rhythm for Liberty (born on the 4th of July), and put yoyo tricks into the poem about YoYo. I thought that adding the breeds of the dogs pictured would be an added bonus. My own dog, Snickers, is in many of the poems. She passed away last November, but her memory will live on in this book.
I know you also have other picture books - can you tell us about them, too? 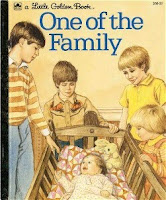 My very first book, ONE of THE FAMILY, is a Little Golden Book published in 1984. At that time most of the ‘new baby’ books were about an older sibling feeling left out and adjusting. My own kids loved new babies! We have six children. I wanted to write about a family where the new baby was accepted and fit right in. ONE OF THE FAMILY is out of print, but can be found on e-bay. 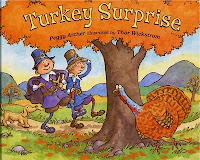 My next book didn’t come out until 2005. TURKEY SURPRISE, Dial Books for Young Readers, is a Thanksgiving picture book about two pilgrim brothers hunting for a turkey and a turkey who is trying very hard to keep out of sight. The idea came from the radio, when two DJ’s were talking about turkeys flying. I never knew that turkeys could fly, and wasn’t sure that I believed it. So I did some research, and found out that wild turkeys do, indeed, fly. After that, I knew I had to write a book where the turkey would fly. The turkey only flies on one page of the book. The real story is about the little pilgrim brother who doesn’t want to hunt for a turkey, and the story goes from there. TURKEY SURPRISE sold well, and came out in paperback from Puffin in 2007 and made the NY Times bestsellers’ list for children’s paperback books that November. 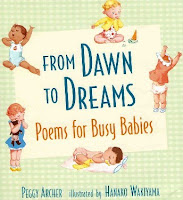 FROM DAWN TO DREAMS: Poems for Busy Babies, Candlewick 2007, was my first book of poetry for children. Intended for babies and toddlers. I wanted to write poems about things that they could understand. I also wanted it to be something that a grownup and the child could interact with. FROM DAWN TO DREAMS is a collection of poems about very simple things that happen throughout a young child’s day—riding in the car, naptime, taking a bath, and rocking, etc.
When you have an idea for a book, how do you structure it? Do you storyboard? Freewrite?
I think about it a lot first. Once I get the beginning in my head, then I can start writing it down on paper. Then I go to the computer to finish it. I don’t outline. I just write, beginning to end. Then revise a lot, and think about details, and tightening the story.
I can only imagine that when you surrender your story to an illustrator, you must have to believe that he or she will "get" your vision. Can you talk about that?
It’s a leap of faith! I need to trust my editor’s vision as well as that of the illustrator and the art director. In the end, I love it. The editor’s and art director’s job is to match the words with illustrations to make a book that is appealing and enjoyable to read. It’s not always what I’d imagined when I was writing. But in the end I can see that the illustrations complete the book, and make it even better. In TURKEY SURPRISE Thor Wickstrom brought the little dog into the story, which along with the expressions of the turkey, added so much to the humor of the story. Hanako Wakiyama’s illustrations for FROM DAWN TO DREAMS gave it a nostalgic dimension. And Stephanie Buscema’s wonderful dogs and detail, including paw prints on the cover and spine, in NAME THAT DOG! add more fun to the book.
Can you tell us something about your personal life – inspirations, plans for the future, goals, etc.?
I have a wonderful husband who has always been very supportive of my writing. We have six children, and six grandchildren. I work as a pediatric nurse at St. Anthony’s hospital, although I only work a few days a month now.  And I am the assistant regional advisor for Indiana SCBWI (Society of Children’s Book Writers & Illustrators), a wonderful organization for children’s writers and illustrators. I love spending time with my family, and enjoy doing things outdoors. I also enjoy reading mysteries and doing puzzles. And someday I am going to start line dancing again!
I’m inspired by other children’s authors and their stories, by people who work with children, and by children themselves. I didn’t start to write for publication until I had five children of my own. I sometime wonder what it might have been like if I had started sooner. Thinking about that, I don’t think I would change anything. I love being a nurse, and I feel blessed to have been able to work only part time and spend time with my children as they were growing up. I love being a children’s author, and I’m enjoying that now. I hope to continue to write books that children love, and that publishers will want to publish. And I hope to always have children in my life.
Do you have any new writing ventures underway?
I’m working on a manuscript about animals and teeth that I hope to have completed by the end of the summer. And I’m looking for a home for a Christmas story called THE BABY IN THE BARN.  I hope to get back to a couple of unfinished projects, and a new idea not yet started, sometime soon.
Do you have a website where readers can learn more about your books?
My website is at www.peggyarcher.com, and you can also read my weekly blog there.
Posted by Janet Fox at 1:52 PM

I wish I knew about Name That Dog a few months ago when we got our new puppy. We ended up naming him Wally (after Red Sox mascot). But I will recommend to anyone getting a new pet and I will remember the next time I am trying to name a pet.

Pragmatic Mom
Type A Parenting for the Modern World

http://PragmaticMom.com
I blog on children's lit, parenting and education.