I am a lucky person. Lucky, lucky, lucky. First, I have the honor and privilege of calling Kathi Appelt my mentor and my friend. Second, I've had the pleasure of reading her latest book THE TRUE BLUE SCOUTS OF SUGAR MAN SWAMP, which is one of the sweetest, funniest, most delightful reads I've had in many a year. Third, I've been able to snag her to appear here.

I've known Kathi for many years, ever since my husband and I landed in Texas for what turned into a 17 year stay. Kathi was instrumental in nurturing my nascent passion for writing, and then twisted my arm until I went to Vermont College of Fine Arts. Now I'm thrilled to host her here in the very week that TRUE BLUE SCOUTS has been accorded the honor of being on the National Book Award longlist in Young People's Literature - which to anyone who has had the experience of reading this charming novel comes as no surprise.

And if you are a student of literature, Kathi's answer to the second question is a fabulous and thoughtful essay.


Right from page one of TRUE BLUE SCOUTS I’m convinced that I’m in the depths of an original “tall tale.” How did tall tales influence this story?

I think that tall tales as a genre are deeply rooted in regions.  I’ve also always been fascinated by the stories surrounding Big Foot.  He’s an icon of the American south, particularly those areas that are swampy and hard to navigate.  So called photos of him always make him look like he’s made up of bits and pieces of the swamp with his mossy coat and huge feet and hands.  So, it made sense to me to build a story around a creature who might actually arise from the landscape itself.

I know you feel strongly that there is an American mythology to be tapped/written – could you please explain what you mean?

Well, I love literature that has an element of magic to it, and of course fantasy by its very nature deals with some aspect of the magical.    But when we think of fantasy as a genre, we immediately think of what I call the “European Model.”  That is, a fantasy that is based upon a monarchical governing structure. There’s usually a “chosen one” at the heart of these tales, chosen not only because of lineage, but also because of some magical power, a power that has to be harnessed or granted or learned.  The notion that a monarch is magical comes directly from the notion that they are direct descendants of God.  It’s that whole Divine Right of Kings thing—it hardly gets more magical than that.  And so, in a lot of modern fantasy, the basic structure begins with the notion that a chosen one will rise to power and become the leader of his or her people, as ordained by a higher power.  (That’s generic, for sure, and overly broad, but it’s useful as a way to understand the basic underpinnings of fantasy as we think of it).
An American fantasy doesn’t have that underlying structure.  In a democracy, we don’t have leaders who are pre-ordained.  Instead we the people choose our leaders.  So, the notion that a person can, via some magical power, become the ruler or leader of his or her people doesn’t work in a democracy.  Thus, when American writers turn to fantasy, it often has a distinctly European flavor.  Or at least I think it does. Americans still love princes and princesses.  We really do love the notion of a chosen one.  How great would it be, after all, if God chose our governmental leaders,  or if the president rose to power because he harnessed the magic of a sword and conquered the opposing forces?  Democracy is so messy in comparison. 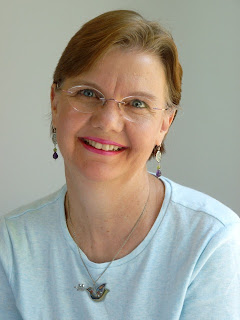 So, the challenge, to me at least, is to figure out what a distinctly American fantasy would look like if you stripped it of the notion of kings and queens.  I do think that tall tales are good examples—they tap into the idea of America being bigger and better than everyone else, and they’re largely designed to have, at their heart, a character who arises from a “regular” family—one who is not necessarily high-born or well-bred.   They reflect, in many ways, the American dream:  that anyone can achieve great things by being themselves and working hard.
Mostly, I think that American fantasy goes deeper than that, or it has the potential of going deeper in that it comes from the peculiarities of regions.   I want to encourage writers of fantasy to find the magic in their locales.  Unlike fantasy that is largely based upon the Divine Right of Kings, American fantasy comes out of the landscape, out of the flora and fauna and the sensibilities of a particular place.  It also comes directly out of the people who live there, and have lived there.
It’s to tap into the ancient stories that the region has offered up, too.  In this regard, Native American stories should be acknowledged as part of the literary tradition of a place and time.   Just as modern Eurocentric fantasy owes an incredible debt to the Arthurian legends, so does American fantasy owe a debt to Native American tales, many of which form the basis for tall tales—especially trickster tales.  The challenge is to discover them, to acknowledge them, and to weave them into the fabric of  tales to come.  I’m no expert on Native American literature(s), but what I do know about it tells me that it arose from the experience of living close to the natural world, that the elements themselves offered up forms of magic that were incorporated into distinct stories.   So the task for the modern American fantasist is to look at the ancient stories of his or her setting, to at least try to see the magic in the local landscape that has been recognized for centuries, and to go from there.
Likewise, legends and tales that have been imported to our country offer up distinct possibilities for a deeply American form of magic.  If you think of the stories of Toni Morrison and Virginia Hamilton, for example, they tap into the vein of tradition that came from Africa via slave ships, and then blend those tales with the politics and landscape of their time, merging them into contemporary tales that illuminate more fully what it is to be not only African American, but fully American.
In The Underneath, I studied every story I could find about hummingbirds.  It’s surprising how many folk tales and legends I found about such a tiny bird.  I tried to understand where the magic arose and tapped into that vein.  Does it have to do with the bird’s quickness, her tiny size, her shape?  What is it about the hummingbird that defies science and offers up the possibility of magic? 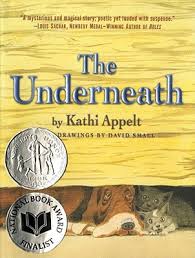 You plant some wonderful seeds in the narrative. I’m thinking especially of the threat, “I’ll need a boatload of cash,” and the saying, “when pigs fly.” (And how literally Chap takes these – so kid-friendly!) How much of this comes to you organically and how much comes with revision?

I would say that one percent comes organically and ninety-nine comes from revision.

And a related question: are you a pantser or a plotter?

I think I start out as a pantser, but once I get my characters established, I turn into an avid plotter.  I confess to being a believer in outlines.  Oh yes, I do believe in outlines.

And yet another related question: I love the asides that are little information grabs – DeSotos, hogs – and that tie so many things together. Did this story unfold in a linear way? Did you know from the beginning you’d be weaving these pieces through the story?

A lot of those little asides were happy accidents.  For example, I had already decided that I would use a DeSoto for the car, largely because of the hood ornament.  I also knew that I would have a rampaging batch of hogs—my Bonnie and Clyde figures—but when I sat down to do a little research on hogs, I almost fell on the floor when I discovered that the first feral hogs came to this continent on boats under the command of, yep, DeSoto.  I had a lot of happy accidents like that.  It’s one of the joys of writing. 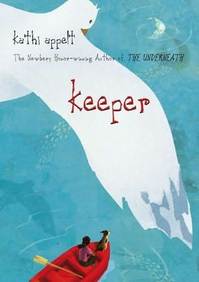 THE UNDERNEATH and KEEPER are gorgeous stories with serious tone – both made me cry like a baby. TRUE BLUE SCOUTS made me cry, too, but in an entirely different way, with tears of laughter. What was it like to “write something funny” for a change?

By now you know that it was Cynthia Leitich Smith who encouraged me to write something funny.  At first, I didn’t really understand why she would send me a note telling me that.  But it arrived at the end of a very difficult year for me, and as a friend, she sensed that I needed to take myself and my whole life a little less seriously.  That is a good friend, who has the wherewithal to tell you something you may not be ready to hear.  So, I’ll be forever grateful to Cyn for her honesty.

And it was exactly what I needed to do.

I have to say that I’m a believer in writing what you have to write.  That’s not always an easy thing to do.  Sometimes it’s painful; sometimes it’s egoistic; often it’s downright stupid.  But often, it’s what your soul requires.  Cyn is intuitive, and she could see what I couldn’t.  I hope that I can be that person for my friends in return.

Is there a recipe for sugar pie, and if so can I have it?

You’ll have to ask Chap or his mother.  But if you can talk them out of it, you have to eat it with a cup of Community Coffee.

Only a big thank you for inviting me to sit down with you!

Kathi Appelt is the author of the Newbery Honor-winning, National Book Award finalist, PEN USA Literary Award-winning, and bestselling The Underneath as well as the highly acclaimed novels Keeper and The True Blue Scouts of Sugar Man Swamp, and many picture books. She is a member of the faculty at Vermont College’s Master of Fine Arts program. She has two grown children and lives in Texas with her husband. For more information, visit her website at http://www.kathiappelt.com/.

And if I ever find the recipe for sugar pie, I'll share with my devoted readers. Oh, and with Chef Armend Latifi, too.
Posted by Janet Fox at 7:01 PM