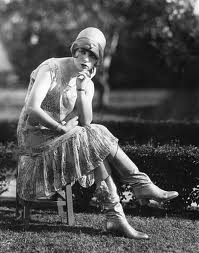 I'm delighted to be able to share that Jen Bonnell, my editor at Speak (Penguin), has offered me a contract on a third historical YA novel, to pub early in 2013!

Things are still evolving as I work but for the moment this story, tentatively titled Moll, is set in the racy and scandalous 1920s and centers on Jo, a teen girl caught in a web of lies, illegal activities, and family secrets. I love the '20s: a wild time of contrasts, new ideas, liberated (and over-the-top) behavior, gorgeous clothes, and lurking darkness (Hilter became Fuhrer of the Nazi Party in 1921; five million people died in a famine in Russia. And that's just a start.)

I'm anticipating the ARCs of my second YA, Forgiven, early in January. Forgiven is a companion novel to Faithful, and follows Kula Baker to San Francisco in 1906. When I have my hands on my copies, I'll be running a give-away contest, so stay tuned.

I'm so pleased with Faithful's success: nominated for the YALSA Best Fiction for Young Adults list, nominated for a Cybils' award, an ALAN pick, and garnering some wonderful reviews. Thank you, sweet readers - I know you can't love every book that comes down the pike, and I appreciate your honesty - and those of you who've told me how much you do love Faithful, know that it means so much to hear.

And if you haven't finished that holiday shopping yet (note to self!), here's a little thought!

Happiest of holidays, everyone - I'll be back in January!
Posted by Janet Fox at 9:42 AM 6 comments:

This is the first post for the debut class of 2k11! I'm truly thrilled that my first guest is not only my mentee, but my Penguin pal - and we also share editor fabulous Jen Bonnell - Julia Karr. Her YA novel XVI sounds brilliant - and you can win a copy! Here she is discussing things that might happen in a future world... 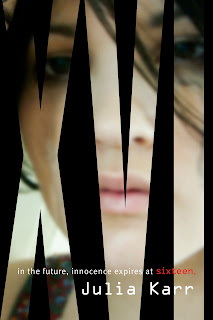 The Class of 2K11 debut authors are being mentored by The Class of 2K10 authors. I am so fortunate to have Janet as my mentor! Thanks for being so supportive, Janet; thanks so much for having me on your blog.

Can you believe there are only 4 weeks left in the 16 Weeks to XVI tour? I know I sure can't. My feelings fluctuate from sheer terror to unbounded excitement (maybe those two emotions are much closer than I think!)

A recent reviewer of XVI wondered how things could go so wrong from present day to XVI's world. Well, XVI takes place in the year 2150, that's 139 years in the future, several generations from now. I think that's plenty of time for current trends (if unreversed) to morph into common practice, and even law. Here are the four things that have me thinking of a future not-so-bright.

1. The vise-grip that media has on nearly all westernized nations. If it's on TV or the Internet - it must be the truth. A viewer chooses their channel of choice and believes every word that comes out of the mouths of the talking heads that continue to shape the beliefs of their listeners/watchers. At some point in the future, there may not be a choice of channels, but just one news source backed by wealth, which runs the government and through them, the media. (I do worry about this!)

2. Currently the distribution of wealth in this country is becoming increasingly polarized. The rich are indeed getting richer, the middle class is disappearing and the have-nots are growing at an alarming rate. In the future, it is entirely likely that not only will the gap increase between the wealthiest and the poorest, but those in between will be judged; sorted by earning capabilities, spending habits (which are encouraged by Media, see above), housing, etc. The ability to move between tiers will become increasingly difficult.

3. It is impossible to miss the increasing sexualization of teen and pre-teen girls. (I mean, come on - baby booties that look like high heels? Blech!) I challenge you to turn on the TV or the internet and go for five minutes without seeing young girls dressed in clothes that would look as natural on a lady-of-the-night as they are beginning to look on our children. And, that's the thing. The more often you see girls dressed in tight-fitting, revealing clothing, the more acceptable it becomes. Of course, girls should be able to dress attractively, but there is a huge difference between attractive and sexually provocative. 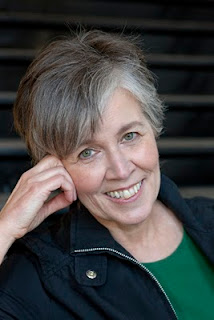 4. Relinquishing freedoms in the name of safety. Such as: GPS trackers planted in our babies so that if they are kidnapped we can find them. And, then not taken out because, what if, as an adult, we were lost or kidnapped? Sounds like a good idea, right?

Covert government surveillance of suspect conversations and activities, seems logical, right? Because, of course, the government is only going to eaves-drop on suspected crinimals. Government-mandated, imbedded identification. Easy, right? Takes care of identify theft and it’s always there, follows you from cradle to grave.

I don’t know about you guys – but, I want “less” government interference in my life – not more. And, to quote Benjamin Franklin, “Those who desire to give up freedom in order to gain security will not have, nor do they deserve, either one.”

Hope this interview gives you an idea of why I find dystopia such a fascinating subject about which to write.

Now – on to the contest! This week’s prize is a pre-order of XVI. To be eligible to win, all you have to do is leave a comment (and contact info please!) (Contest is U.S. only – sorry!)

Next Friday morning (the 17th), Random Number Generator will pick the winner! And – all commenters will be entered in the Grand Prize drawing to be done in Week 1.

Again, thanks so much for having me on your blog, Janet! It’s been such fun!

You are so welcome, Julia! Julia's website is: http://juliakarr.com
Posted by Janet Fox at 7:21 AM 65 comments:

Everyone faces a few roadblocks to writing, whether personal or creative - I'm in that place at the moment - and my own way to push through roadblocks is to turn to smart crafty type folks for inspiration. 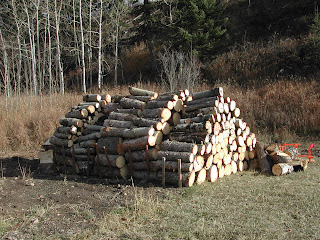 We're now living in a small but cozy cabin in the Montana mountains and we do burn wood, mostly for pleasure, in the fireplace, and my industrious husband spent a number of weeks gathering what I thought was an extravagant amount of wood for this winter. Here's what the pile looked like in October.

All that wood brought to mind one of my favorite quotes, from Annie Dillard's The Writing Life, about her time in a small cabin in Maine:

One night, while all this had been going on, I had a dream in which I was given to understand, by the powers that be, how to split wood. You aim, said the dream - of course! - at the chopping block. It is true. You aim at the chopping block, not at the wood; then you split the wood instead of chipping it. 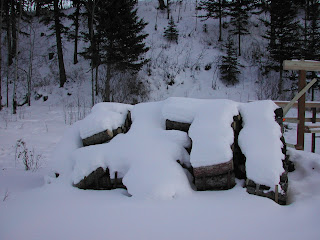 Now, I really like that metaphor. I think it speaks volumes about life. Even when life throws up obstacles, like the massive (everyone's saying record-breaking) amounts of snow we've been having lately, and that are making life difficult, to say the least.

Dillard recognizes that this metaphor also speaks to writing:

Who will teach me to write? a reader wanted to know.


The page, the page, that eternal blankness, the blankness of eternity which you cover slowly, affirming time's scrawl as a right and your daring as necessity; the page, which you cover woodenly, ruining it, but asserting your freedom and power to act, acknowledging that you ruin everything you touch but touching it nevertheless, because acting is better than being there in mere opacity; the page, which you cover slowly with the crabbed thread of your gut; the page in the purity of its possibilities; the page of your death, against which you pit such flawed excellences as you can muster with all your life's strength: that page will teach you to write.


Aim for the heart, aim for the eternal truth of your work; aim for the chopping block.
Posted by Janet Fox at 8:39 AM 2 comments: