K.A. Barson About Her Debut YA Novel 45 POUNDS (MORE OR LESS)

K.A. (Kelly) Barson and I overlapped at Vermont College of Fine Arts, and I couldn't be more delighted to host her on my blog this week. She's terribly funny and insightful, and I'm imagining that her novel, 45 POUNDS (MORE OR LESS) will reflect her temperament. Plus, she routinely streaked her hair different colors - purple was my favorite. How can you not love that? And, her debut was selected as an Amazon editor's pick for best teen book for July!

Congratulations on the publication of your novel, 45 POUNDS (MORE OR LESS.) Can you tell us a bit about the story and what inspired it? 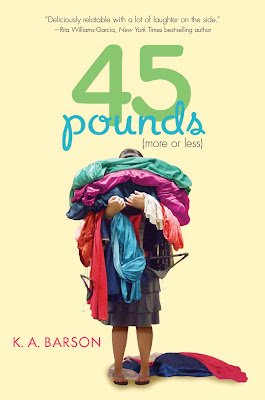 It’s about a sixteen-year-old girl who wants to lose 45 pounds (more or less) before her aunt’s wedding. It was inspired by my desire to write a book about a real girl who is overweight, but her biggest battle is within her own head.

I’ve been writing seriously since 2004. This is not my first effort, but it is my debut novel for publication. I have other manuscripts. Some are submittable, others are far from it.

Can you describe your path to the publication of 45 POUNDS (MORE OR LESS)? Did your Vermont College experience play a role?

VCFA played a huge role! The manuscript would never have been in the shape it was in if not for Martine Leavitt’s and Rita Williams-Garcia’s questions and direction and, of course, two workshops full of brilliant faculty and students who made me think about what worked and what didn’t.

Don’t be in a hurry to submit. Concentrate on craft for at least 10,000 hours. Read at least 1,000 books. I’m not exaggerating. I’d heard that early on, but was too eager to publish to listen. I regret it now. Focusing on submissions before I had something worth submitting only added more time to my process, which from beginning to release is about nine years.

Excellent advice, Kelly. Can you tell us something about your personal life – inspirations, plans for the future, goals, etc.? 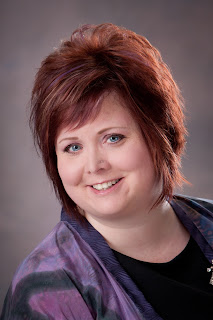 I love spending time with my kids, grandkids, and dogs. Oh, and my husband, parents, and friends, too! People inspire me, so as long as I can be around people some of the time and be alone long enough to write the stories they inspire, I plan to continue doing that as long as I can.

Yes! My next novel, also a YA contemporary and also with Viking (Penguin), is about a high school cosmetology student who thinks she has her whole life planned out and under control until it all falls apart. She has to figure out how she contributed to it before she can figure out how to fix it.

Do you have a website where readers can learn more about 45 POUNDS (MORE OR LESS)?

Bonus question: what was the name of your VCFA graduating class, and how did you choose it? (Note: in the Writing for Children and Young Adults program each class takes a name, that is a huge secret until it is revealed during a performance. Yes, we do have fun!)

I am a Bat Poet (Jan. 2011). We chose our name based on Randall Jarrell’s adorable book by the same name. (Maurice Sendak did the illustrations.) In the book, a little bat wants desperately to write something that people want to read/hear. SPOILER ALERT: He does, and the woodland creatures pay him in crickets for his work. Our class related to the little bat—his longing to create art that readers relate to, his insecurity about whether anyone would, and his desire to be paid for it—so that’s what we called ourselves. I love my Bat Poets!

I know THE GREAT GATSBY has been overshadowed by flashier summer fare, but, if you missed it in theaters, don't miss it when it comes to your living room. Here's my take...

Up-front confession: I’m a big fan of Baz Luhrmann. Not to mention Leo DiCaprio. But I don’t think those predispositions got in the way of my major two-thumbs-up response to Luhrmann’s interpretation of F. Scott Fitzgerald’s The Great Gatsby.

When the novel about the mysterious but wealthy Jay Gatsby’s (DiCaprio) love for and attempt to steal away the unhappily married Daisy Buchanan (Carey Mulligan) was published, it received mixed reviews, and Fitzgerald died disappointed – almost penniless and having wasted his body with alcohol. Luhrmann chooses a framing device for the movie where narrator Nick Carraway (Tobey Maguire) serves as a stand-in for Fitzgerald, by drafting the story to his psychiatrist in later years. For me, this works because of the instant association with the author, and the kind of posthumous approval he receives through the character of Carraway.

The movie is lush and opulent and natural imagery pops off the screen – even in 2-d – in vivid color. Skies aren’t just studded with stars: they are overwhelmed by the majesty of the infinite. Flowers don’t just bloom: they drip and ooze such that I could swear the air is perfumed. The costumes are lust-for gorgeous, and the music, though contemporary, fits so perfectly that it slips seamlessly, but beautifully, into the effect. And the visual impressions Luhrmann makes with Gatsby’s fabulous parties are beyond eye candy – they are excessive with glitter, noise, laughter, frivolity, class and race disparities, drunkenness, hedonism, waste.

When I was writing Sirens, my touchstone was Gatsby. The 1920s are revered as “high times”, but those high times hide dark secrets and even darker social injustices. And Luhrmann gets this in spades.
Posted by Janet Fox at 3:34 PM 2 comments: