I'm pleased to announce that my second novel and the companion to FAITHFUL, FORGIVEN, is now available as an e-book on Amazon Kindle for $2.99.

If you haven't read FORGIVEN - and I hope you'll give it a try! - here's the synopsis:

Kula Baker never expected to find herself on the streets of San Francisco in 1906. The daughter of an outlaw, Kula is soon swept up in a world of art and intrigue – a world she hardly dared dream of back in Montana. She meets handsome David Wong, whose smiling eyes and soft-spoken manner have an uncanny way of breaking through Kula’s carefully crafted reserve. Yet when a mighty earthquake strikes and the wreckage threatens all she holds dear, Kula realizes that only by unlocking her heart can she begin to carve a new future for herself.

This is the second launch for FORGIVEN. Unfortunately, it's been out of print for almost a year, but fortunately my options as an author with an out-of-print book are now greater than ever.

I'll share a bit of my journey in case you're curious or in the same position. 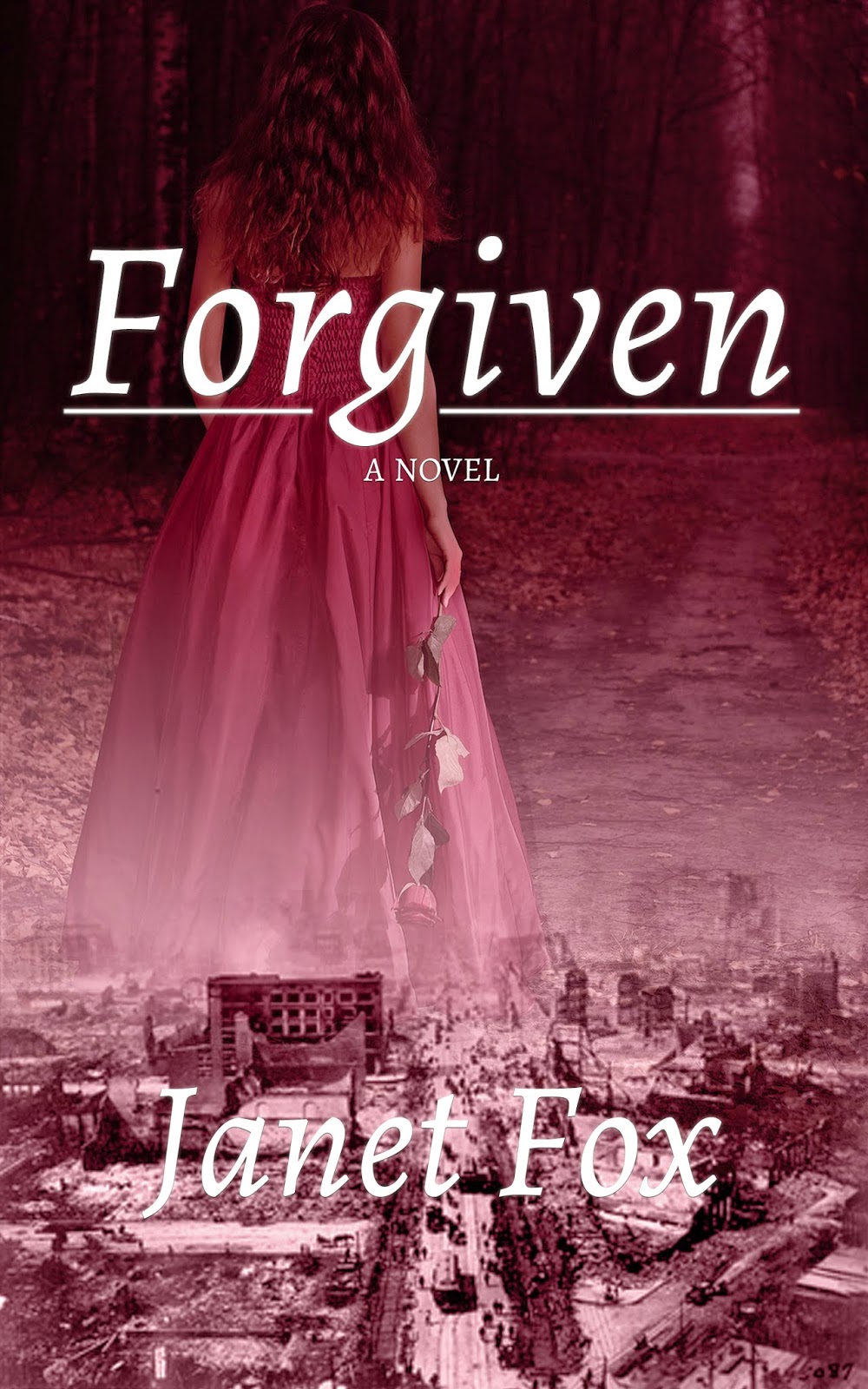 I couldn't be happier with the design, which pulls together an image of San Francisco after the earthquake and fires of 1906 with the period flavor of the girl's clothing and the sense of searching that dominates the novel.

I found Elijah after scouring the web for cover designers and choosing him for the clarity of his designs. I also had advice on all matters including cover design from Chris Eboch and Dotti Enderle, who have much experience with e-book creation. And I should add that Elijah's price was extremely reasonable.

After returning my electronic rights to me, my publisher graciously supplied me with an epub version of the manuscript. This was great, because it allowed me to retain much of the interior design; but Amazon uses mobi files, not epub, and I'd decided to launch with KDP Select because the terms are better for me.

My web designer Lynn Kinnaman helped me by converting the epub first to Word and then to mobi, and then we set up the book to publish. We had to go through several corrections but Amazon makes that easy by allowing you to preview the text since sometimes glitchy little software errors do creep in. I looked through the text carefully because I find it no fun to read an ebook with quirky issues.

If you have a final, clean manuscript in Microsoft Word, it's much easier to go from there, but all interior design has to be removed. Frankly, I was thrilled to have Lynn's help, as my left-braininess doesn't extend to the tedious job of formatting.

It felt like it took forever, but really the process was very easy, thanks to all the advice and help. If you have questions, please fire away!

I'm delighted today to welcome Stacy Nyikos to the blog. Her newest picture book, Toby, is a delight, with a sweet story and charming illustrations. Stacy and I overlapped at Vermont College of Fine Arts, and during our shared workshop I was impressed by her talent and insights.

First a bit about Toby: "Birds, and crabs, and crocs - oh my! Can Toby outslip, outslide, out-double flip and dive them? Join this curious little sea turtle as he follows his heartsong from egg to ocean."

Hi Stacy! So great to have you here. What inspired you to write about sea turtles?

That’s easy. Countless, very excited, energetic young readers! I do a lot of author signings at aquariums, and the number one question I get from children is, "Will you write a story about a turtle?" This went on for almost five years, but I never had a story idea. Then one day, I was coming home from an aquarium signing, and I think all of that collective energy from those eager readers finally hatched its own idea and Toby was born. I didn’t even make it home. I had to pull over and write the story down. It was awesome. 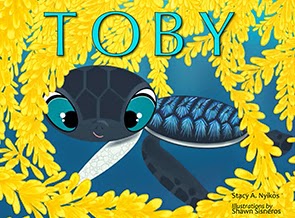 Toby is not your first publication. How did you get your start?

Sea animals gave me my start. My girls were in the aquarium/zoo stage. We visited A LOT of them. The giftshop was, of course, one of the most exciting exhibits. The girls were repeatedly drawn to the plush animals, toys, rocks. I searched and searched for a couple of books to take home, something that would last longer than a week. It was a hard search. I finally decided to try to do something about it and started writing books featuring sea animals. I’ve since moved on to dragons, fantastical worlds, and dogs, but sea animals will always be closest to my heart. They inspired me to write for children.

I know you've written both picture books and longer work. Do you have a preference?

I don’t. I don’t have that much control! The story decides what kind of form it’s going to take. I’m just along for the ride. As fate would have it, it’s usually when I’m months into a longer novel that a rush of picture book ideas comes to me. I’ll take a day – sometimes a week – off from the novel to get the ideas down and hash out a few rough drafts, before getting back to the novel. The break usually gives me a second (or sixteenth) wind for the novel, which moves along faster again. It’s as if I need that break from the marathon of a novel for a few picture books sprints to finish any of it.
We were together at Vermont College of Fine Arts (VCFA rocks!) How did that experience change you as a writer?

Vermont College helped me understand how better to wield the tools in my writer’s toolbox. It also trained me to write more consciously, to direct my story a little more effectively. I have to turn off the conscious writer sometimes to let my characters play, but I enjoy being a little more clued into what I’m doing now. I like to think it makes me more even-keeled, but the secret drawer of chocolate in my office still needs a lot of refilling.

Would you share your writing process? In particular, how do you write a rhyming picture book like Toby? 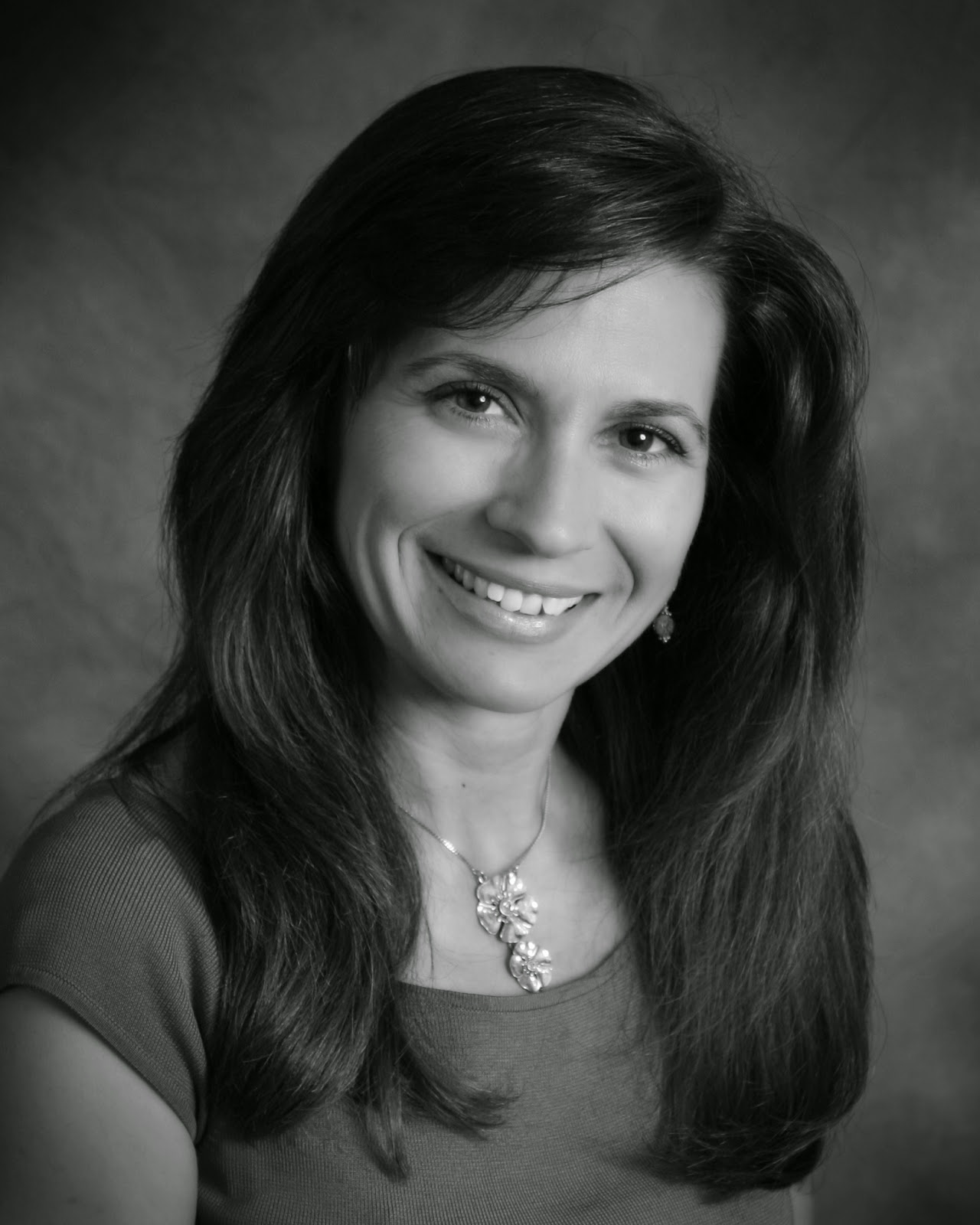 Oh man, sharing my writing process is like voluntarily showing my messy closet to my mom because my process is REALLY messy. I’m not much of a plotter. I like to let a story develop, to experience it – at least the first draft – the way my readers will. That’s half the fun of writing for me. But it’s really messy. My characters like to take off and do their own thing, leaving me hanging high and dry. I spend a lot of time herding them back, or following them if they just won’t come. Mondays are generally pretty cranky days because they do not want to get back on my storyline. The other days aren’t much better. I wake up thinking about plot lines, forget where I’m driving because a character will suddenly appear in the seat next to me and start chatting. Story dogs me even when I don’t want it to, and I never have a pen when I should, which makes my whole writing process messy, messy messy (but secretly, A LOT of fun :) ).

What's coming up next for you?

I’m in the early stage of marketing for another picture book release in November, Waggers, which is about a newly adopted puppy who tries to be good – he tries really hard! – but his tail gets in the way. Writing-wise, I’m working on a picture book about a family of singers who can’t actually sing, The Four Tenners. I’m also working on a YA novel, Skin Deep, a retelling of Moses in a Blade Runner setting. I started it at Vermont College and am now revising. And finally, I’m laying the groundwork for a new YA, Legacy, about a high school senior whose parents are all over her to take the college, job, career fast track and her grandfather who helps her find a her path.

Find out more about Stacy at http://www.stacyanyikos.com/blog.html

My new agency is a blessing in so many ways. I love, love, love my agent. But I also feel like I've joined a family - her co-agents, her staff, and all of their talented clients. The agency recently held a retreat - a fabulous experience - and it was like the best party of all time.

Some of these gifted writers I'd known for a long time and are old friends, and some are new friends. One of the latter is Anna Staniszewski. She writes for "tweens" and her voice is spot-on. Hilarious, charming, moving, wacky, smart. So I invited her here today to talk about that voice and give us a few insights.

And I hope you'll check out her new release, The Prank List. 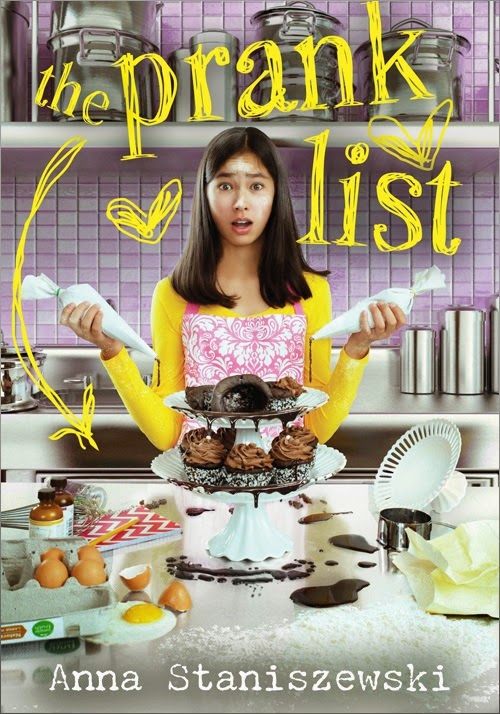 Born in Poland and raised in the United States, Anna grew up loving stories in both Polish and English. Currently, she lives outside Boston with her husband and their crazy dog. When she’s not writing, Anna spends her time reading, daydreaming, and challenging unicorns to games of hopscotch. She is the author of the My Very UnFairy Tale Life series and the Dirt Diary series. Her newest book, The Prank List, releases on July 1st from Sourcebooks. You can visit Anna at www.annastan.com.


Don’t worry. I will not be writing this post in “tween speak.” Why? Because if I wrote it that way purely to make a point, the voice would feel fake and cliched. And that, I think, is the key to writing a believable tween voice--you can’t force it. But there are some things you can do to help the voice along.
First, it has to fit the story you’re trying to tell, and it has to fit the characters, as well. Not all young people sound the same, so if you’re writing what you think a thirteen-year-old sounds like instead of what your specific character sounds like, you probably won’t get very far. You might need to journal in your character’s voice or throw him/her into wacky situations and see what s/he does and says in order to get the voice just right. 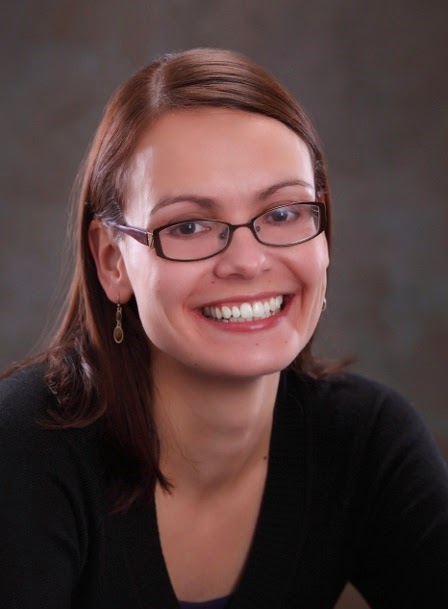 This brings me to my second point: Avoid cliches. Just because you hear kids on TV saying certain things doesn’t mean that kids in real life and/or kids in your books would say them. If you’re going to use catch phrases and slang, it’s often better to make those up rather than rely on real ones that will probably feel tired in a matter of weeks.
And finally, focus on emotions. Honestly, that’s what I spend most of my time working on when I’m writing a story. I think about what the character is feeling, how the story is affecting him/her, and how the events are going to bring about the character’s emotional evolution. Once I have the character’s personality and emotional journey figured out, the voice often emerges naturally.
If you know what your characters want, what they're going through, and where they're headed, somewhere along the way, you’re bound to discover their unique voices.
Posted by Janet Fox at 5:48 PM 4 comments: