Today I'm delighted to bring to you another guest post, this one from author Jackson Keene, on books for boy readers. He has combined genres in his novel NOLICHUCK! TJ'S WILD FRONTIER ADVENTURE, and it sounds like Jackson's truly hit the mark.

If you are interested in appealing to boy readers, also check out my guest post from Andy Sherrod in addition to Andy's blog.

It’s been my experience––both as an avid reader in my own youth as well as what I know about middle-graders and high school male readers of today––that guys in general are just as demanding, detailed, and devoted bookworms as the girls.  We just like different kinds of reading.

Most boys and men like action and adventure.  Loads of it.  Preferably with shooting, fighting, and necessary fatalities to the bad guys.  But without being gratuitous or gory.  Plot twists, intrigue, subtleties, and a little romance are fine, too, with a greater amount of amorousness allowed for the more mature.

But as a group, males devour strong action.  And we also like to see the underdog win.  Overcome overwhelming odds.  The truth is, ordinary guys who wind up doing extraordinary things are more appealing to many of us than reading about superheroes that are always expected to come out on top. 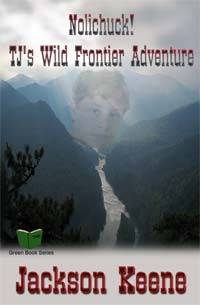 This is exactly what I’ve attempted to do in NOLICHUCK.

What I’ve also done is written a tale that combines historical fiction with contemporary fiction:  A lot of adventure and a touch of young romance in the distant past, followed by continuing big adventure and a little love in the present.  Not so much amorousness that it turns off the pre-teen and teen male reader.

Life is rough for him.  His confidence is below ground level, and his courage is suspect. 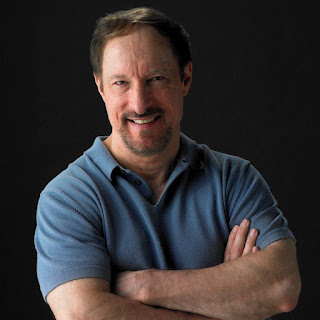 And then that mysterious little green book had to go and throw him into the past.  And not just any past, but into the untamed forbidding forests of 1802 eastern Tennessee along with the savage Indians, wild beasts, bloodthirsty robbers, backwoods ruffians, and log cabin living!  Yup, it’s definitely not 2011 Knoxville anymore.

And he thought his present life was bad news!  But TJ’s adventures are only beginning.  Along the way, he fights off killer beasts and bandits and braves, meets the young Davy Crockett, gains a world of confidence in himself, finds his first real love, and is befriended by a fantastic frontier family who really has it together.

When he returns to the present, he’s a brand new person––but there're killers loose in his house, bullies waiting to beat him up at school, a pretty new girl at Highland High he's hasn't even seen yet.  And the aftermath of the little green book to deal with!

Denise Jaden has written a great new novel, NEVER ENOUGH, with an important theme: self-esteem. So many teens (myself included, back in the day) feel terrible about themselves in one way or another - feel that they can't measure up, aren't "perfect".

Denise gathered a number of fellow authors to tell readers how, yes, we felt badly in one way or another but it does get better. In fact, it can get pretty darn great.

So if you have issues with self-esteem take a look at the video, and take heart. There is happiness out there.

For more about Denise's new novel and this issue take a look at her blog: http://denisejaden.blogspot.ca/

Wow - take a look at that fabulous cover! I'm ready to take the plunge into this one.

My guest today is Shayne Leighton, author of new gothic series, OF LIGHT AND DARKNESS, talking about the series' first book, THE VAMPIRE'S DAUGHTER. I'm delighted to welcome Shayne to my blog.

Congratulations, Shayne, on the publication of your novel, THE VAMPIRE'S DAUGHTER. Can you tell us a bit about the story and the series and what inspired it? 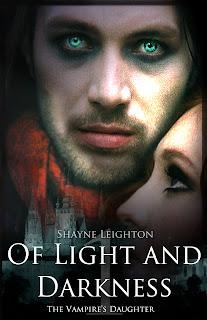 Thank you so much! Of Light and Darkness is a new adult Gothic fairytale that takes place in Prague, Czech Republic, about a young girl who was raised by a vampire and is the only mortal to live among the magic and all sorts of impossible creatures. People in my life inspired the characters in my novel. I imagined what kind of creatures the people closest to me in my life would be. The plot followed soon after I developed the characters.

You describe this series as "gothic fairytale." Can you elaborate on this?

I am mostly referring to the overall mood of the story. I don't want readers to see this as an epic Lord of the Rings kind of fantasy. It's not that. I imagine this story more along the lines of Interview With the Vampire and Pan's Labyrinth or even the new Snow White and the Huntsman. It's different. There are a lot of dark and colorful visuals about this story that make it different from a lot of other fantasies. It is Gothic, but it even encompasses a little steampunk, a little Victorian, and little urban fantasy. The story is very eclectic.

Eclectic sounds like fun! Please give us a hint about the next books in the series. When will they be out?

Currently, I am working on releasing the second book in the series, THE VAMPIRE'S REFLECTION. That book will be released in the next month or two. It picks up where the first book left off and promises to entail many new oppositions for the characters to overcome. The love triangles are back and I introduce new ones as well. Book two is a little darker and more complicated, and it really sets up the epic third book in the series. 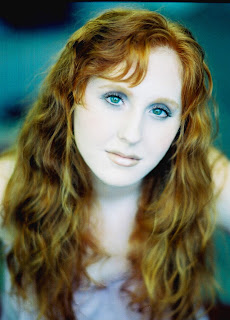 I understand there may be a movie in the works - how exciting! How did that come about?

My background is primarily in screenwriting and filmmaking. I'm heavily involved in the independent film community in South Florida. Utilizing some of the connections I had from previous projects as well as making new connections, it seemed like the logical next step.

Do you have any advice for beginning writers? Any details about your path to publication that you'd like to share?

Every idea is a good idea - even if it needs a little tweaking. Don't ever give up on an idea that you love because you receive a 'no' from a publisher or an agent. There is a lot of rejection in publishing. Believe in your work and in your story. Keep tweaking until you are happy.

Do you have a website where readers can learn more about THE VAMPIRE'S DAUGHTER?

The 1920's. Flappers and Prohibition. Gangsters and speakeasies. A wild and crazy time that followed the Great War and preceded the Great Depression. So, is that all there is?

Not a chance. As I gear up for the launch of my third young adult novel, SIRENS, I thought I might address the Roaring Twenties in all their glory - including a ton of stuff you might not know, a lot of stuff that I learned as I was researching the novel. For example, are you aware that there was a Wall Street Bombing in September 1920 that killed a number of people and was called a "terrorist" threat? Yes? No? Let's start there.

The early twentieth century saw a huge immigrant migration into the United States. In fact, this country wouldn't be the great nation it is without the waves of immigrants who "made good" in the burgeoning economy that followed World War 1 (at the time, it was called the Great War, the war to end all wars). But the immigrants to this country also faced discrimination and isolation. And the Russian Revolution of 1917 generated a fear of socialism and what was called "Bolshevism." It was the time of the Big Red Scare and anything foreign, odd, or not "American" was frightening, especially those thought to be harboring Bolshevik or socialist ideas.

Amid all the angst there were terrible incidents: the riots in Chicago and Tulsa, that rose out of racial tension; bombings in 1919 targeting public officials. The temperature was rising, and the Attorney-General, A. Mitchell Palmer, met it with his own guns blazing, raiding meetings in a hunt for "radicals".

And then came a shocking event on September 16, 1920. In the street in front of the office of J.P. Morgan and Co. a bomb went off around noon, just at lunch hour, as clerks were heading out for a bite, as secretaries were taking their breaks. It formed a huge cloud of acrid smoke that rose up between the buildings of Wall Street, shattered windows for blocks, wrecked havoc with Morgan offices, and clouded the air with dust and debris. Thirty people were killed outright, hundreds were wounded. The bomb had been planted in a horse cart parked on the street. The horse did not survive. 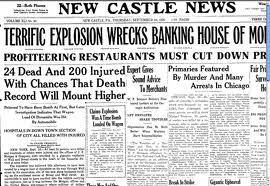 But the ostensible target, Mr. Morgan himself, did. He was not at work - he was traveling abroad. Clerks, runners, stenographers, secretaries, brokers' assistants - they were the victims. And the perpetrators? No one knows, to this day. A $20,000 reward was posted (a fortune at the time), but nothing came of it. Two Italians -Sacco and Vanzetti - sentenced to death for their involvement in similar incidents were accused but they were never indicted in the Wall Street case.

September...Wall Street bomb...many innocent people killed...terrorism...fear of foreigners...What amazed me as I researched the 1920s was how many parallels there are between that decade today. This is why I love writing historical fiction - it's like looking in a mirror.

Every couple of weeks leading up to publication (some time in November!) I'll be posting on the 1920s and the interesting stuff I've uncovered. Enjoy!