WEIRD ROCKS Rocks!! Plus a Giveaway

When I was a kid my first hobby was rock collecting. It all started with one of those little sampler boxes that we picked up at a museum. Then my parents took us rock-hounding: searching for gems in places open to the public. Then my sister found (and subsequently lost, sadly) a lovely ruby. Then I got my masters in geology. Then I married a geologist...well, you get the drill.

What I would've given for a copy of this book when I was young! Michele Corriel has written a truly fun exploration of some of the weirder rocks on the planet. Today she's here with a guest post, plus she's giving away one copy of WEIRD ROCKS. It would be a great addition to any library. All you need to do is comment and I'll put you in my random giveaway generator! 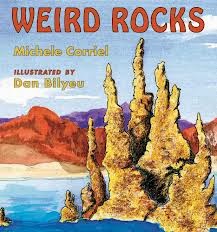 Sometimes it’s easy to think of a non-fiction picture book (or any non-fiction book) as a way to get information across to young readers. But for me, it’s much more than that. It’s an opportunity to understand language. It’s a new door opening for a poetic perspective. A new inlet to creativity.

For example, you can’t say the “obsidian black sky” before you know what obsidian is. You can’t say “the granite feeling of winter” without knowing how old and stubborn granite can be.

There is also something empowering about being able to name things. (Think about Voldemort and how by never saying his name everyone became even more afraid.) For me, non-fiction is more empowering than the Hallow's elder wand.

So when I’m sitting down to write a non-fiction picture book, I think very hard about the words I’m using and how to embracing the language in a way that can open the door for young readers to use those words and to understand the concepts, not just in the scientific way, but in a poetic way as well.

In the same way, non-fiction books can used in the classroom as a means to seeing vocabulary not only as definitions but to hear how melodic words can be, how close beauty is to an idea. And, of course, as a way of avoiding the dreaded clichés. 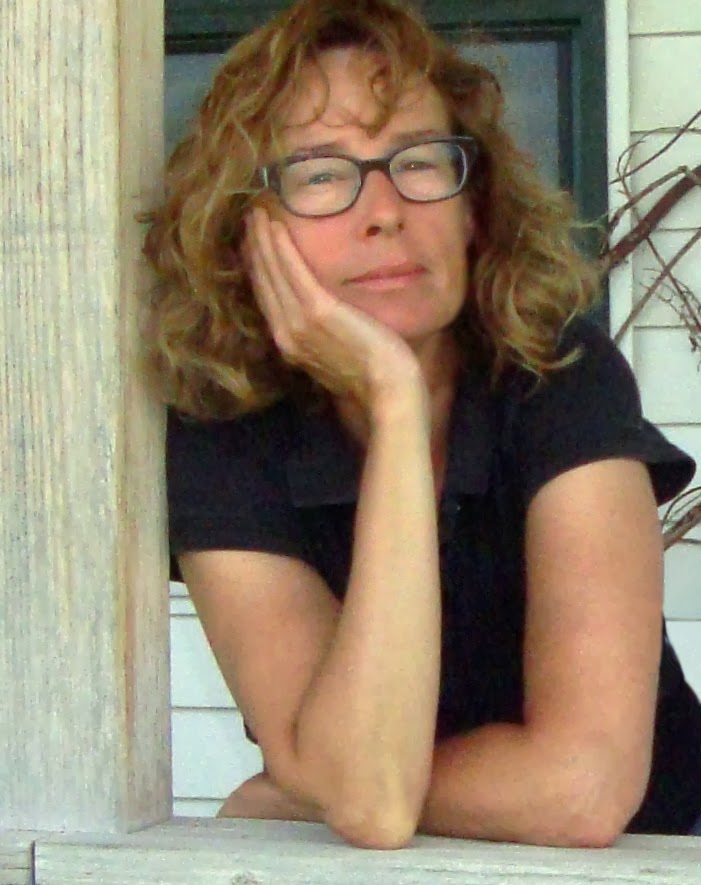 Another way to use non-fiction for creative writing is to use the old “what if” scenario. What If the continents never drifted apart? What kind of world would we live in? Would we be a single country?

I also like to try to think out of the box when I approach a subject that has the potential to be very dry. I try to come up with a new way to introduce the reader to something as boring as, say, a simple rock. For every rock we come across there is a history as ancient the earth itself. Sometimes, even older (I’m thinking of meteorites). I think of star dust and mysteries. I think of cities destroyed by volcanoes. Or inland oceans whose only signature is the fossils they left behind.

Besides the words themselves, besides the story behind the subject, there are the people whose lives are dedicated to sorting out a single question.

The world is such a fascinating place, and it is the job of the non-fiction writer to get that point that across to the reader.

Check out the WEIRD ROCKS trailer, and then comment to win a copy!

Julie Berry's Gorgeous Novel ALL THE TRUTH THAT'S IN ME

I've known Julie Berry for quite a few years now, ever since she came back to Vermont College of Fine Arts as an alum and we met while I was a student. She's smart and savvy and a good friend, and she's written some wonderful, fun novels, but my favorite is her most recent, ALL THE TRUTH THAT'S IN ME. It's a fascinating story that I'm recommending to everyone as one of my 2013 top reads. Here's a synopsis:
"Four years ago, Judith and her best friend disappeared from their small town of Roswell Station. Two years ago, only Judith returned, permanently mutilated, reviled and ignored by those who were once her friends and family.
Unable to speak, Judith lives like a ghost in her own home, silently pouring out her thoughts to the boy who's owned her heart as long as she can remember--even if he doesn't know it--her childhood friend, Lucas.
But when Roswell Station is attacked, long-buried secrets come to light, and Judith is forced to choose: continue to live in silence, or recover her voice, even if it means changing her world, and the lives around her, forever.
This startlingly original novel will shock and disturb you; it will fill you with Judith's passion and longing; and its mysteries will keep you feverishly turning the pages until the very last." 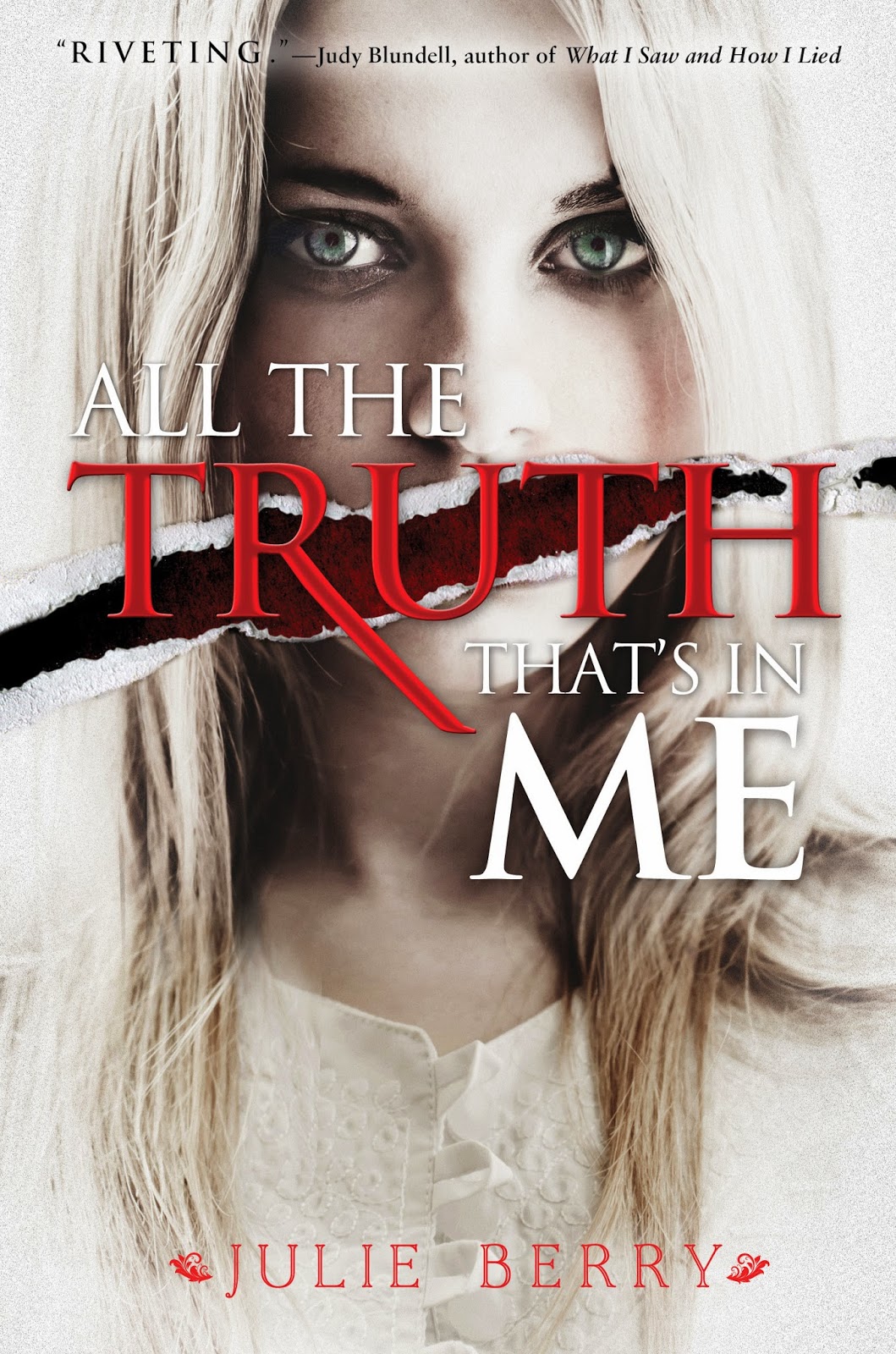 Congratulations, Julie, on your stunning new novel, ALL THE TRUTH THAT’S IN ME. That second person address is such a twist – well done! Please tell us how you were inspired to write this story.

This project began by accident. I was working on my critical thesis, a lengthy research paper assigned during the third semester at Vermont College of the Fine Arts, and I read some material in a craft book about second person point of view. I wondered, could I write something in that voice? I reached for my laptop, flipped it open, pondered for a bit, then wrote the first page in one sitting. Very little of it has changed to the present day. The voice appeared from that moment, and it remained throughout the process. It was one of those little miracles you pray for as a writer. Looked at another way, though, it was an act of homework procrastination.

One of the reasons for the novel’s appeal, I think, is that your setting feels both real and timeless. Can you comment on that?

The setting unfolded gradually. I saw it, at first, in a somewhat misty focus, swirling into view only as needed around Judith, as if she were walking through a cloud. I knew from the outset that I could not set this in a historically known place and time, because I didn’t want Judith’s story overshadowed one smidgeon by the expectations we bring to standard historical fiction (much as I love them where they properly belong). At some point I needed to make some decisions about what era to pattern this time period after, and the early modern period is a useful one in that the world still feels antique, pastoral, and pre-technological – which is where I think that nostalgic sense of timelessness resides -- but society has already begun to confront issues of philosophy, politics, reason, religion, and ethics that feel recognizable and relevant to us today.

The way that you handle Judith’s mutilation is deft and realistic. Was this something you had to research?

I wanted desperately to research it, but I couldn’t find any sources at all. I did consult informally with a practicing speech therapist, but most of my research came from personal practice and imitation. I spent a lot of time talking as I believed Judith would attempt to do, and documenting the sounds and sensations I observed. After the book came out, I met a reader at a book club meeting who was also a speech therapist. She had worked with a patient who, for medical reasons, ended up in a physical plight much like Judith’s. She told me that the depiction of Judith’s journey toward speech rang true to her own experiences with her patient. I felt so relieved and grateful to know it.

Above everything else, for me this novel is a moving love story. Is that how you would describe it?

I think so. I hope so! I wanted very much for readers to fall in love with this love story the way I did. It’s nice to know you felt that way. 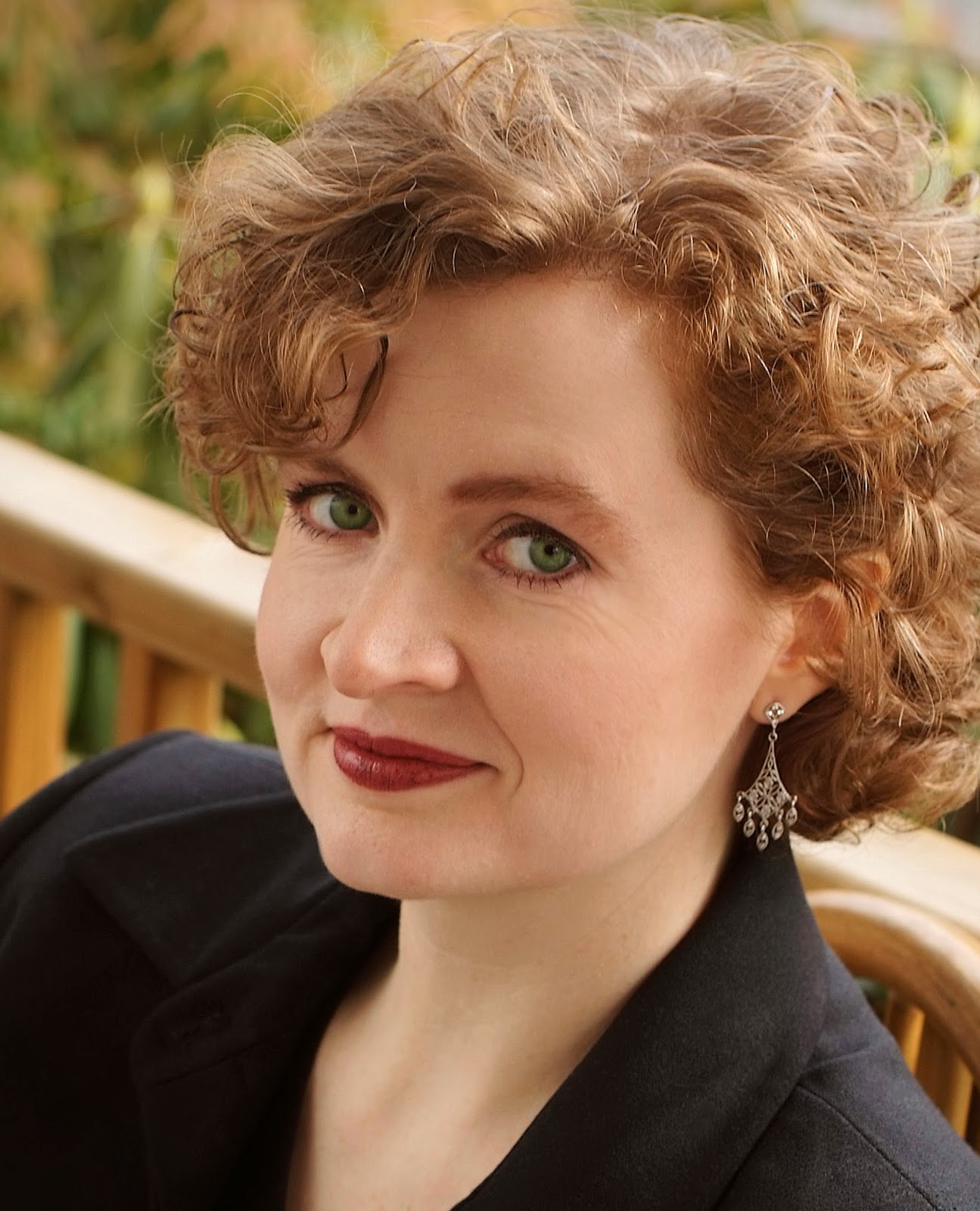 I’m in awe of the way that you handle time – short, back-and-forth passages and no chapters. Somehow it works – not only is it not confusing, it adds power. How did you craft the story?

Strange as it may seem, the structure, the ordering, the length of chapters, the non-linear movement through chronological time, just happened that way. I wish I could say I architected it all in keeping with a brilliant master plan, but this is simply how Judith’s story unfurled. It was a singular experience.

Anything else you’d like to add? What do you have coming next?

I have a middle grade murder mystery coming out this fall from Roaring Brook which I’m really excited about, titled The Scandalous Sisterhood of Prickwillow Place. It’s three parts murder and two parts farce, and, of course, one part Victorian schoolgirl hijinks. It’s very different from All the Truth That’s in Me, but I like to keep things interesting.

Thanks so much, Julie!

Knit One, Purl Four: On Patience

After a hiatus of some years, I've recently taken up knitting again. It was one of those spur-of-the-moment things, looking in a shop window at all the brilliant yarn colors and thinking, well, why not? A small investment.

Plus, I really needed a way to disconnect.

Those who know me well know that I am not a patient person. I'm also something of a workaholic. I love writing and when I spend more than a couple of days away from it, I become very unhappy, anxious, fretful. I guess I’m a little compulsive about my work. I want to get the story out, put it on the page, open it to the world.

But much of writing requires patience. For one thing, the best stories are those with depth and nuance, and those things take time to craft. Like the best stews must simmer, the best writing needs to simmer both on the page and in the brain. Simmering requires time.

When I finish a draft, I’m impatient to get it out there, somewhere, but that’s a poor strategy, isn’t it? Yes, we all know how tempting it is to hit “send” way too soon. (It can be equally destructive to keep rewriting the same story over and over and over, but that’s a discussion for another post.) It takes time and distance – simmering – to recognize the flaws in a work.

So, knitting. I’ve discovered that knitting is very meditative. Anything I knit that is complicated requires counting, and at least a minimal attention to what’s occupying my hands. I can listen to something but it’s hard to carry on a conversation. Other voices in my head go quiet. Even my nagging little internal editor shuts up.

Plus, I'm learning to slow down and become patient.

I’d love to hear from some fellow knitters – or, do you have another strategy for developing patience?