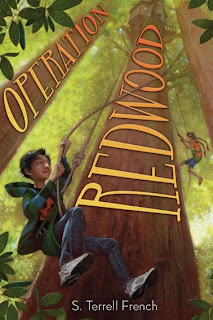 During this week of Earth Day celebrations, I'm delighted to introduce you to S. Terrell French's timely OPERATION REDWOOD.

Congratulations on the publication of your novel, OPERATION REDWOOD. Can you tell us a bit about the story and what inspired it?
OPERATION REDWOOD is the story of four children and their quest to save a grove of old-growth redwoods. The main character, Julian Carter-Li, is a twelve-year-old San Francisco boy. His father is dead and his mother has gone off on a trip to China and left him in the care of his wealthy uncle, Sibley Carter, who heads an investment company, IPX. The story begins when Julian finds himself alone in his uncle's office and uncovers an e-mail with the subject heading "SIBLEY CARTER IS A MORON AND A WORLD-CLASS JERK!!!" Unable to resist, he opens the e-mail and discovers an angry rant from a girl named Robin Elder, who is furious about IPX's plan to cut down a redwood grove near her home. The rest of the story follows the exploits and misadventures of Julian and Robin as they set out to save the redwood grove.

I was interested in writing a book about children who come together to solve an environmental problem -- my first image of the book was a boy uncovering an e-mail from a faraway girl about some issue that he knew nothing about. Because the book is set in San Francisco, I was also interested in writing about a multicultural set of characters (Julian is half-Chinese and his best friend, Danny Lopez, is Hispanic and fluent in Spanish). And I wanted the story to be exciting and fast-paced and funny! When I was writing OPERATION REDWOOD, my son had this good-hearted and hilarious group of friends, and I think the energy and humor of Julian and Danny came directly from them.

You deal with an important contemporary issue (feel free to elaborate). Was it challenging for you to address this in the context of the story?
I wanted my book to be about an issue that would be meaningful to children and I think children have an intuitive love of forests, especially redwood forests which are so spectacularly beautiful. OPERATION REDWOOD is an adventure story, but it's also a story about land and how we use it. Probably the most stunning fact about redwoods is that more than 95% of the original, old-growth redwood forest -- two million acres stretching from Santa Cruz to the Northern California border -- has been logged. I think this kind of environmental history is often unfamiliar to children (and adults) and yet it's an important part of our heritage. I learned a lot doing the research for this book and I'm hoping that kids will come away with a sense of hope, but also with some new questions about the land around them: What is sustainable? What is its best use? In the book, these questions aren't abstract because the redwood grove is a place Robin loves. Most places that are saved in the real world are saved through the efforts of people who feel a deep connection to them.

How long have you been writing for children/teens? Have you written other books or is this your first effort?
This is my first effort and my first book.

Can you describe your path to the publication of OPERATION REDWOOD?
A friend read the manuscript and recommended it to her friend at Janklow & Nesbit. She passed it on to Kate Schafer Testerman, who specializes in YA and children's books (she now has her own agency, kt literary). Susan Van Metre at Amulet Books was interested from the beginning. Kate and Susan have both been great to work with and I feel very lucky to have found a home for OPERATION REDWOOD at Amulet. Susan was not only a very thoughtful editor, she made sure that the book was printed on paper certified by Forest Stewardship Council (recycled or from well-managed forests). It was important to us that the book be true to its environmental message.

Do you have any advice for beginning writers?
Try to write the best book you can! Keep in mind what you find appealing as a reader. You'll have plenty of time to fret over agents and editors and publication later. I did take a weekend course on children's book publishing at one of our fabulous independent bookstores, Book Passage. It gave me some basic information, but was also a little daunting.

Can you tell us something about your personal life – inspirations, plans for the future, goals, etc.?
I have three children and still work part-time in environmental law, so I'm pretty busy. My three kids are my main distraction, but also my inspiration.

Do you have any new writing ventures underway?
I'm working on another middle-grade story set in San Francisco.

Do you have a website where readers can learn more about OPERATION REDWOOD?
Yes. www.operationredwood.com. It has a page of information on redwoods and also information for teachers (including a teacher guide with questions, projects and vocabulary lists).
Posted by Janet Fox at 12:09 PM

Wonderful interview! I can't wait to get my hands on Operation Redwood!

Fran - you are so sweet! Thank you for stopping by so often.
Reminds me I need to go visit your place...!