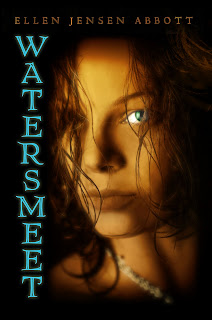 Congratulations on the publication of your novel, WATERSMEET. Can you tell us a bit about the story and what inspired it?
First of all, I should say that it is a fantasy, complete with dwarves, centaurs, fauns, and shape-shifters. It's about a girl, Abisina, who has been rejected all of her life because of the way she looks. Her mother, the village healer, has been able to protect her because her skill is needed by the village. But a new leader arrives in the village and turns the people against the outcasts. Abisina is forced to flee, alone, and search for her father—someone she has never met—in a legendary place called Watersmeet. Accompanied by a dwarf, Haret, she journeys north and faces mythic creatures, benevolent spirits, her own prejudices, and dreams that look like nightmares.

I have always been a fantasy reader so when Abisina came to me, she existed in a fantasy setting. The setting was a big part of the inspiration. The land Abisina lives in is called Seldara, and I started writing about Seldara at a point several hundred years after Abisina's story takes place. At that time, it was a land divided. I got to wondering what had caused this division and as I explored Seldara's legends and history, I found the true beginning of my story: Abisina's discovery that she knows only half of her land, the southern—and that the other half, where Watersmeet is, offers something very different.

It's such an interesting title. Where does it come from?
My husband's great aunt lived near where we live now in Pennsylvania. She died before I joined the family, but my husband always talked about visiting her as a boy. She was a doctor, way before many women were doctors, and had a country practice in her house. Her house was called Watersmeet; I assume there were streams that met there or something, though I realize now that I never asked. The name was part of our family lore and as I was creating this legendary community that Abisina seeks, I realized that it existed at the meeting of three rivers. The name popped into my mind. It first was the name only of the place Abisina is seeking, but my editor, Robin Benjamin, suggested it as the title for the novel, replacing a pretty lame working title I had been using.

How long have you been writing for children/teens? Have you written other books or is this your first effort?
I have been writing for about ten years. I am not one of these writers who "always knew" I wanted to be a writer. I did enjoy academic writing and I remember someone asking me once if I wanted to be a writer. I answered: "I don't have anything to say!" I had to grow up and gain confidence in order to feel like the stories I wanted to tell were worthwhile to share with the world.

WATERSMEET is my second book. The first was called A Child of Seldara and it is actually a sequel to WATERSMEET! I don't know why, but the book that came to me first is now slated to be the concluding book in a four book series. When I submitted it for publication, Margery Cuyler, the publisher at Marshall Cavendish, thought there were good things going on in it, but that it felt like a sequel. She was right! So I wrote the first book and that sold.

Can you describe your path to the publication of WATERSMEET?
Like lots of authors, once I admitted to myself that I wanted to write, I started attending conferences to learn about the industry. The conference that played the biggest role for me was the One on One conference, hosted by the Rutgers University Council on Children's Literature. At the One on One, each new writer is paired up with an experienced writer, editor or agent. I was accepted to the conference three times and was blessed with excellent mentors who worked with me beyond the day of the conference: Gail Carson Levine, Clara Gillow Clark and Sue Campbell Bartoletti. At this same conference I also met Margery Cuyler, who, as I mentioned above, bought my book, and my agent Ginger Knowlton! The connections I made here and at SCBWI conferences were invaluable.

Do you have any advice for beginning writers?
Just do it. It's the "butt in the chair" approach to writing. If you don't show up, it's not going to happen. I have trained myself to write in short bursts because that is all I have. (I teach full time and have two kids.) I can't wait for inspiration. It is almost always hard getting started and it almost always pays off if you push through and get some words out. Aside from that, read all the time. There are amazing books out there—read them and learn from them. Finally, educate yourself about this business: read "how to" books, join on-line communities, and participate in the conference circuit. But hold on to yourself. The first "how to" book I read said: Don't start with a novel, don't write fantasy. At that point, I was 50+ pages into my fantasy novel!

Can you tell us something about your personal life – inspirations, plans for the future, goals, etc.?
Personal goals: ski the Rockies! Now I ski in Pennsylvania. I can't even imagine the Rockies!

Plans for the future: I want to cut back a bit on teaching and spend more time on writing. I can't imagine giving up teaching all together. I love being in the classroom and working with students. I have so much fun! But this year has been hard with a book coming out, another book that I am supposed to be writing, and a family that I love spending time with. Like so many of us, I'm in search of that elusive balance.

Do you have any new writing ventures underway?
I am working on the sequel to WATERSMEET. It's been neat to hang out with some of my characters again, and also to invent some new ones. WATERSMEET ends with the creation of a new land: Seldara. The two halves of the country are poised to find a way to become unified. But the hurdles are enormous and Abisina is going to need to be part of the resolution.

Do you have a website where readers can learn more about WATERSMEET?
Yes. My blog is at www.ellenjensenabbott.com . I blog there about the writing process, what I'm writing, what I'm reading, and other topics.
Posted by Janet Fox at 7:39 AM